It's All A Kind Of Magic by Rick Dodgson 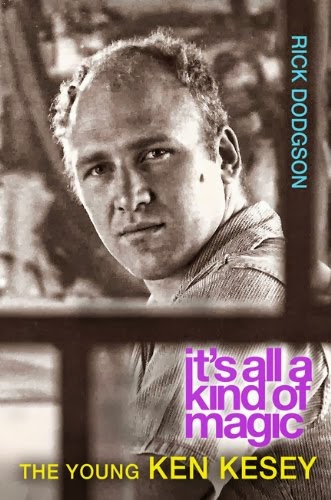 Counterculture icon and best-selling author of the anti-authoritarian novels One Flew Over the Cuckoo’s Nest and Sometimes a Great Notion, Ken Kesey said he was “too young to be a beatnik and too old to be a hippie.” It’s All a Kind of Magic is the first biography of Kesey. It reveals a youthful life of brilliance and eccentricity that encompassed wrestling, writing, farming, magic and ventriloquism, CIA-funded experiments with hallucinatory drugs, and a notable cast of characters that would come to include Wallace Stegner, Larry McMurtry, Tom Wolfe, Neal Cassady, Timothy Leary, the Grateful Dead, and Hunter S. Thompson.

Based on meticulous research and many interviews with friends and family, Rick Dodgson’s biography documents Kesey’s early life, from his time growing up in Oregon through his college years, his first drug experiences, and the writing of his most famous books. While a graduate student in creative writing at Stanford University in the late 1950s and early 1960s, Kesey worked the night shift at the Menlo Park Veterans Administration hospital, where he earned extra money taking LSD and other psychedelic drugs for medical studies. Soon he and his bohemian crowd of friends were using the same substances to conduct their own experiments, exploring the frontiers of their minds and testing the boundaries of their society.

With the success of One Flew Over the Cuckoo’s Nest, Kesey moved to La Honda, California, in the foothills of San Mateo County, creating a scene that Hunter S. Thompson remembered as the “world capital of madness.” There, Kesey and his growing band of Merry Prankster friends began hosting psychedelic parties and living a “hippie” lifestyle before anyone knew what that meant. Tom Wolfe’s book The Electric Kool-Aid Acid Test mythologized Kesey’s adventures in the 1960s.
Illustrated with rarely seen photographs, It’s All a Kind of Magic depicts a precocious young man brimming with self-confidence and ambition who—through talent, instinct, and fearless spectacle—made his life into a performance, a wild magic act that electrified American and world culture.
______________________________________________________________

"It's All A Kind Of Magic" by Rick Dodgson was born out of his doctoral dissertation on the life of Ken Kesey.

This biography documents the first part of Ken Kesey's life in great detail - from his childhood, growing up on farms in Oregon, to his later years at university and beyond becoming the famous author of " One Flew Over The Cuckoo's Nest" and his second book "Sometimes A Great Notion". 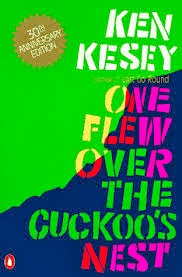 It is interesting to know that the title for his first book, was derived from a poem his Grandma Smith taught him as a young boy:

“William, William Trimble toes,
he’s a good fisherman,
catch his hands put ’em in the pans,
some lay eggs, some not,
wire, briar, limber lock, three geese in the flock,
one flew east, one flew west, one flew over the cuckoo’s nest; "

"Cuckoo's Nest is one of the most popular novels of our time, reprinted more than 100 times in the US alone."(source: redhousebooks.com) 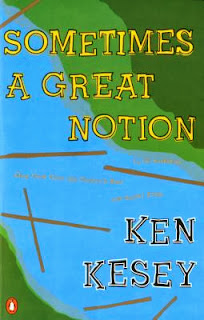 
This book would turn out to be a breathtaking accomplishment, a genuine classic of twentieth-century American literature.

Kesey was a prankster, a jokester, a frat-boy, a jock, an author, a natural entertainer, a party animal and a dreamer. In one person lived a rebellious soul who found wholesomeness and happiness in laughter. He loved people. They loved him. He questioned everything and sought out his own personal truths away from the mainstream of the 1950's and 60's in America when the country was involved in the Vietnam War and new social trends were being born on all levels of society. The world was not ready for his approach to life. He was breaking through a well-guarded mold and was not welcomed or appreciated.

Kesey became on of the 'lab rats' for testing different drugs, including LSD, which was sponsored by the CIA. A fact that led Senator Ted Kennedy to accuse the CIA of having engaged in activities that “involved the perversion and the corruption of many of our outstanding research centers in this country.” 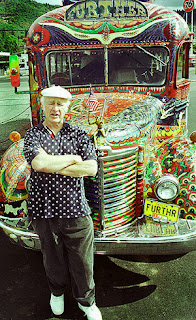 "The VA trials were legal and officially sanctioned, and the substances they were testing seemed harmless yet fantastic. It was typical of Kesey and his friends that they wanted others to share their good fortune with others. Initially at least, this is how the psychedelic revolution got its start, rippling out from the first few initiates to their circle of friends, and then out to their circles of friends, and so on."

Ken Kesey needed the money. At the time of participating in the drug tests, he was a speech and communications major at the University of Oregon (U of O). He never realized what a profound effect the drugs would have on him and all the people he introduced to it. He never was a drinker but managed to remain popular in his fraternity where alcohol binge-drinking sort of guaranteed anyone's acceptance into the fold. Non-drinkers, normally, were ignored.

Tom Wolfe’s book "Electric Kool-Aid Acid Test" (1968) describes this part of Kesey's life in detail. The book was a huge best seller and firmly established Wolfe’s career. Ken Casey was regarded by some as the “father of the counterculture”, and became a cult figure after his arrest for possession of marijuana, although he never felt comfortable with the idea.

This traveling road show of the Merry Pranksters, as they became known, would set off the hippie movement in its wake. 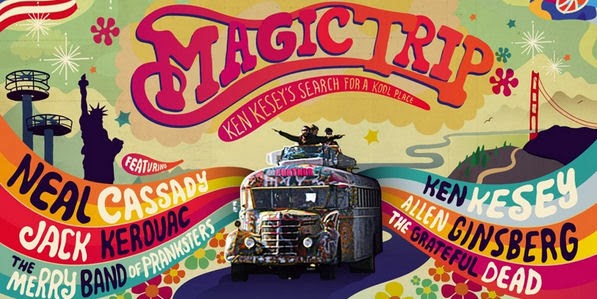 "The Pranksters’ 1964 bus trip, for example, is remembered as an acidfueled odyssey, but in addition to the LSD-laced orange juice in the fridge behind the driver’s seat, the Pranksters also took along a jar containing five hundred Benzedrine pills (as well as a shoebox full of joints rolled specially for the occasion by Prankster Steve “Zonker” Lambrecht).

Kesey was well aware of the absurdity of being held up as an icon of some sort of anti-American counterculture when he actually saw himself as a defender of the American way. “I’ve always been far more conservative than Barry Goldwater can imagine,” he told an interviewer on the CBS Sunday Morning Show in 1990. “I still believe in all that stuff . . . I haven’t ever developed any kind of cynicism about the American Dream.”

He considered himself a link between the Beat Generation of the 1950s and the hippies of the 1960s. "I was too young to be a beatnik, and too old to be a hippie," Kesey said in a 1999 interview with Robert K. Elder. 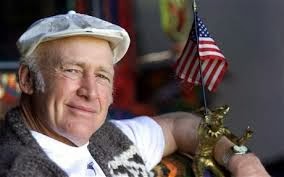 MY COMMENTS: The book is published by the University of Wisconsin Press and is clearly not a sensationalized account of Ken Kesey's life. It is almost a quiet tribute to an extraordinary individual's life, honoring a human being who played a great role in changing the course of history without too much fanfare and bongo drum rolls.

Although he was, like all young men, ambitious, he was also teaching his people a new approach to life, without becoming a caricature or a clown, although his parties were beyond wild and bohemian. He always remained a fraternity boy in everything he did. His charm, for me, lies in his approachable personality; his boy-next-door-and-best-friend character. He loved to party and have fun, but he also knew how to work hard. He was highly intelligent, a visionary, who understood the psyche of the American people much more than most people around him and saw a social revolution coming, long before it happened. I personally suspect that he could have been someone much more important if he was born in a different social class. His background counted against him in many ways. The fact that he was short-changed in selling the movie- as well as theater rights to his first book, illustrates how naive and inexperienced he was in the world of big business. He did not have the right kind of people on his side to protect his interests. He was seriously taken advantage of. 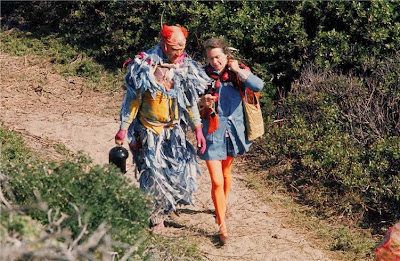 Ken Kesey started and ended in Oregon. Full circle. He experienced it all: from a modest little boy building his own toys and being best friends with his brother on the farm, entertaining friends, family and audiences in his hometown as ventriloquist, actor and magician, to becoming a famous writer being wined and dined by the big wigs cashing in on his talent. In the end he chose to get away from it all. He returned to Oregon where he led a quiet life as a cattle farmer in Pleasant Hill, Oregon.  The memories of a lifetime was packed away in a dusty back yard building.

"Further" was parked in its final resting place under the tree, until the author of this biography changed its destiny. It was a very very good thing. I feel honored to have met Ken Kesey through the hard work of Rick Dodgson. 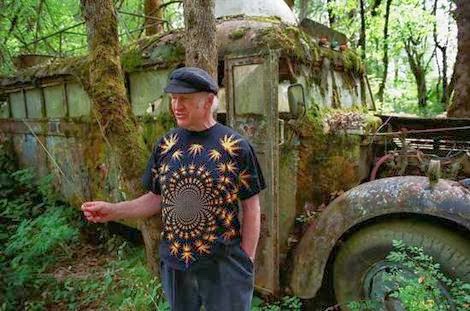 The book is slow moving, detailed, tedious. But for the reader who is interested in Ken Casey's life and times it is an excellent read and well worth the time it takes to finish the book.   The details of his boyhood on the farm, as a student, and as natural charismatic leader are well presented. Excellently researched. Rick Dodgson managed to portray a compassionate, adventurous, fun-loving rebel who lived his own version of the American dream.


Despite getting impatient with the book at times, I thoroughly enjoyed the experience. I became so fascinated by the subject, Ken Kesey, that I ventured off onto the internet and got lost in the world of a one-man-band who managed to make a difference just by being himself. He passed away on November 10, 2001, and was buried on his farm alongside his son who died in a car accident. I honestly wanted to cry. 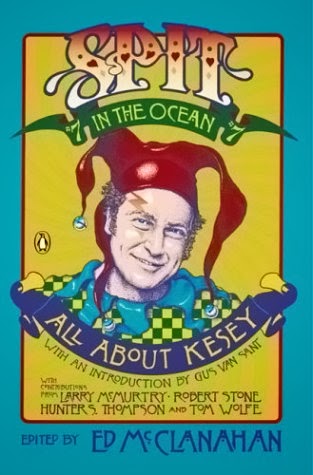 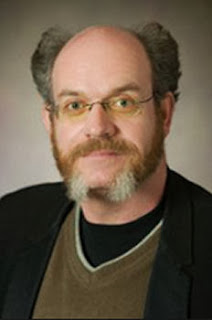 This is the first biography of Kesey (author of One Flew Over the Cuckoo’s Nest), revealing a youthful life of brilliance and eccentricity that encompassed wrestling, writing, magic and ventriloquism, CIA-funded drug experiments, psychedelic happenings, and fearless trippy spectacle.

Rick Dodgson is associate professor of history at Lakeland College in Wisconsin. English by birth but global by inclination, he has lived much of his life outside the United Kingdom. In his younger years, he worked as a plumber, heating engineer, soccer referee, handyman, Mediterranean deckhand, and teacher of English in a village on the slopes of Mount Kilimanjaro. He is also the creator and producer of "Mission to the Stars: A Space Rock Opera." This is his first book.
Information source: Boswell Book Company on Facebook

Hello,
Just stopping by to tell you that I nominated you for a Liebster Award. You can get the rest of your info at my blog
http://highway-ya.blogspot.com/2013/12/i-got-nominated-again-for-liebster-award.html
Congrats
-Ericka