Marketing the Moon by David Meerman Scott and Richard Jurek 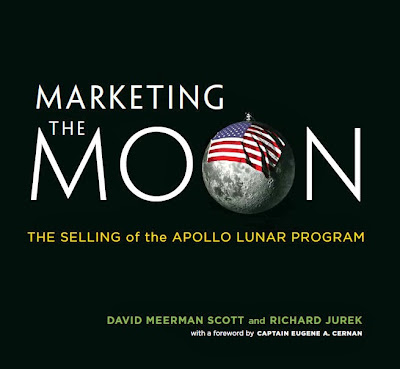 BOOK BLURB:
To call the Apollo Program the greatest marketing exploit of the 20th century is not hyperbole, but, as David Meerman Scott and Richard Jurek show us, simply a statement of fact. Thanks to this thorough and detailed account, we can better understand not just the talent and dedication of the Mad Men-era professionals who sold the Moon to a global public, but also the larger transformation of statecraft into stagecraft, and the enduring and irreversible transformation of the public sphere into an enterprise of image creation, and manipulation. - Nicholas de Monchaux, Associate Professor of Architecture and Urban Design, University of California, Berkeley, and author of Spacesuit: Fashioning Apollo
_________________________________________________

"Marketing the Moon" is an illustrated and comprehensive report of the history of the historical moon landing in marketing terms. The known, unknown, good, bad, the amazing, the challenging, the behind-the-scenes drama and jubilation. The discussion goes back to Jules Verne, who wrote his book 'From the Earth To The Moon', 104 years prior to the event, and proceeds to all the marketing gimmicks employed in the 1900's in the media, to the ultimate 400 000+ people contributing products, technology and other skills in making the moon landing possible.

This books, only 144 pages long, speaks for itself. It is a must-read for anyone interested in space. The technology used, the engineering accomplishments, the marketing machine, the ordinary Americans who made it possible, the stories of individuals involved, the Hollywood and media machine run-up - every single aspect around the space program is discussed in detail.

"Our goal for Marketing the Moon has been to examine the inner workings and public perceptions of the Apollo lunar program through the lens of practicing PR and marketing professionals. We do not attempt an encyclopedic presentation, but rather an analysis of what was done, and what worked and what did not."

" The goal of the Apollo program was to send a man to the Moon and return him safely to Earth, and do it before the end of the 1960s. Without fully realizing it at the time, we took
those first steps to the Moon with the first manned mission of Project Mercury, when Alan Shepard flew his sub-orbital flight on May 5, 1961, becoming the first American in space. It was but three weeks later, on May 25, 1961, that President John F. Kennedy stood before Congress and said, “First, I believe that this nation should commit itself to achieving the goal, before this decade is out, of landing a man on the Moon and returning him safely to the Earth. No single space project in this period will be more impressive to mankind, or more important for the long-range exploration of space; and none will be so difficult or expensive to accomplish.” That sealed what became our goal and commitment leading to the historic landing of Apollo 11."

The marketing campaign reached the entire world. If the Americans thought it was huge, they probably were unaware of the reaction in the rest of the world. It was MASSIVE news! I still vividly remember the wonderment, the magic, the incredibility of this achievement. I think I was in love with all the astronauts at once and still am!

"This greatest technological achievement of the 20th century was also a global event, as an estimated 600 million television viewers watched and listened as Eagle landed on the Moon and as the first human footprints marked the lunar surface. The achievement of broadcasting live television from the Moon was nearly as astonishing as landing there. Though the buildup to this moment was long, there can be no denying that the drama was epic and the dangers very great. Within the scientific community, it was understood that nearly every possible scenario required detailed preparation, ranging from anticipating physical mishaps and catastrophes to the remote likelihood that the astronauts might return to Earth carrying dangerous microbes."

This book explains how a timeline transformed the escapist dreams of writers and artists through centuries into a scientific goal, by applying mathematics and science to it and accomplish the unimaginable. But it also emphasize the immense role that the media played in the endeavor.

"When reflecting upon the importance of television in Apollo’s legacy, Gene Cernan, the last man to walk on the Moon, was emphatic. “If you want to market the Apollo program, put the astronauts on television and let them have a press conference on the way home. Without television, Apollo would have been just a mark in a history book. But to those people who were alive and remember it, it’s visionary, as if they were there. “One of the best compliments I got was: ‘Gene, you took me with you.’ And that’s what I wanted to do. I was there with you. That’s what television did—it took you with us when we went to the Moon. We didn’t say ‘We’ll tell you about it in two weeks.’ We took you with us. The power of television is unbelievable. That’s what television does. What you are seeing is happening at this instant. The liftoff from the Moon is a good example. You could sit in your living room listening to the commentary of Apollo 17, but you could also watch it happening at that instant."

To read Marketing the Moon' now after all these years, brings the deepest happiness and joy back, igniting the same pride in the American achievement in reliving those magical moments. But this time around many years have passed, we have all grown up and older, and can appreciate the immensity of this achievement so much more. This book captures the events that made it possible for hundreds of thousands of people to work together and unite for a common goal and pull it off on that scale. It is the biggest marketing success story in human history.

The book contains interesting, detailed as well as informative photographs and facts. The only issue I have with it is that it is a very difficult read in e-book format. The text is spread over three columns on each page with the photographs embedded in it as well. But since this is a NetGalley read, I do not mind. I will buy this book and give it to everyone to read. For anyone involved in the marketing world, or interested in history, and a fan of space programs, this book is for you. It is nothing but a HUGE THRILL. MONUMENTAL BLISS comes to mind!


David Meerman Scott:
My book The New Rules of Marketing & PR opened people's eyes to the new realities of marketing and public relations on the Web. Six months on the BusinessWeek bestseller list and published in more than twenty languages, New Rules is now a modern business classic. My popular blog and hundreds of speaking engagements around the world give me a singular perspective on how businesses are implementing new strategies to reach buyers.

I'm the author of other popular books about marketing including Marketing Lessons from the Grateful Dead: What Every Business Can Learn from the Most Iconic Band in History and World Wide Rave: Creating triggers that get millions of people to spread your ideas and share your stories.

I am a recovering VP of marketing for two publicly traded technology companies and was also Asia marketing director for Knight-Ridder, at the time one of the world's largest newspaper and electronic information companies. I've lived and worked in New York, Tokyo, Boston, and Hong Kong and has presented at industry conferences and events in over twenty countries on four continents.

Check out my blog at www.WebInkNow.com

******************************
Richard Jurek:
In a corporate marketing career spanning the past quarter century, Richard Jurek has experienced the dramatic transformation in marketing strategies and tactics in a wide variety of banking, insurance, real estate and finance industries. At the companies he has served, he has been critically involved in the process of transformation, as many have gone "kicking and screaming" into the real-time world, especially as it relates to connecting with their various audiences, and injecting key strategic messages into the rapidly evolving news cycle.

While content remains king, the speed, method, and strategies have changed more in the last ten years than ever before - and he has not only the battle wounds and scars to prove it, but also the war stories and case studies which inform his current advice and counsel to the companies he serves. With corporate stints at both private and publicly traded, global enterprises, Richard has worked all facets of marketing and marketing communications, with a particular expertise in media relations, media training and crisis communications.
Over the course of his career, Richard has written and published numerous articles for marketing and communication publications, including during the early days of commercial internet publications such as NetGuide and Internet World where he was an early voice for using online resources to gain a real-time advantage. Marketing the Moon: The Selling of the Apollo Lunar Program, co-written with David Meerman Scott, is his first non-fiction book.

Thanks so much for your review of our book Margitte! We appreciate it. We say printer proofs last week and the book "in person" looks amazing. The e-version doesn't do the images justice.

Your book deserves all the stars it can get! Congratulations on all your hard work. There is much to learn from it for many people. The writing style is also excellent. It is informative yet entertaining. Well done!