Time Of Death by James Craig 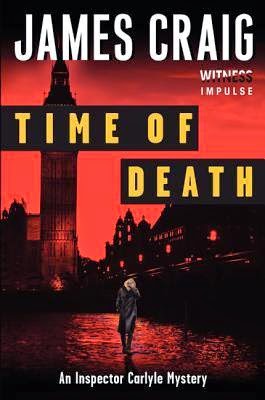 MY REVIEW
Inspector Carlyle investigates the murder of Agatha Mills, which took place in her apartment across the street from the British museum. Her husband is arrested for the murder as all evidence point to Henry Mills's guilt. But he refuses to admit it was him and commits suicide.What started out as an open-and-shut-case becomes something totally different soon, although nobody, except Inspector Carlyle, is convinced. The ripple effect across London, diplomatic offices, and international companies, forces the laid-back detective to work longer hours than he hoped for. After all, life is pretty mediocre in his quarters and he doesn't appreciate his feathers being ruffled too much. He loves his walks around town, since he never learnt to drive, doesn't even possess a license to do so. He enjoys his elongated breaks away from the office, his slow breakfasts and lunches in quaint little restaurants, and a personal mobile phone which he seldom answers. Off and on he remembers to visit the gym. He needs to stay in shape, right? Yes, he is a slow mover, a relaxed person, a quiet operator. However, his mannerisms are making a lot of people nervous. Very nervous. Especially when he refuses to close the case and hand in the report. REVIEW:I don't want to go into the complicated plot, developing after the first murder, and spoil the surprise. The drama keeps the reader hooked way more hours than was planned as it is. Losing-sleep-hooked. Nothing spectacularly dramatic hammers away at the heart muscles, or causes severe headaches, but below the seemingly suave exterior an angry river is pulsing through the story. Manipulation, corruption, back-stabbing, greed and danger: it's all there and it's very real. The protagonist is brought alive in all his splendor. Everything about the detective's life is painted in multiple colors. He becomes important to the reader. The dangers facing him becomes our concerns. His enemies shake up our core much more than the inspector's. He is not a nice man in every sense. The reader might not even like his attitude at all. And yet, we are rooting for him in getting his job done. A constant sense of foreboding is keeping the reader at it, come time or social objections to the opposite! The suspense is heightened by John Carlyle's 'casual' encounters with the antagonists. A joke and a laugh neutralize many volatile situations. But he is also a man who does not steer away from raising the stakes and getting people jittery and drinking away their concerns about his slow but steady approach into their lives and secrets. They know he is coming for them in his own way. The story is multifaceted. In fact, it is rich in British textures and hues. I was pleasantly surprised with the content of the plot. There is a constant hanging knife suspended over the characters'lives. The suspense becomes intense, unbearable! The ending....mmmm....no comment. It might be a cliffhanger, for all I know, since this book forms part of a series. But it was good enough for now, anyway.A wonderful, relaxing, yet intriguing read. I haven't read the author before, but will certainly consider his other books. I enjoy his writing style. You don't need any other relaxers with this kind of book in hand.The book was provided by Witness Impulse through edelweissabovethetreeline.com for review. Thank you for this excellent opportunity.

_____________________________________
BOOK BLURB
The worst murders occur closest to home . . .When Agatha Mills is killed in her own apartment in the shadow of the British Museum, there is only one suspect--her husband, Henry. For Inspector Carlyle, it seems like an open-and-shut case. But much to Carlyle's chagrin, Henry refuses to confess. Worse, he comes up with an alternative version of events that is nearly impossible to investigate.Carlyle just wants to put the murder to bed, but when a distraught Henry kills himself on the way to prison, doubts begin to surface. The mounting evidence indicates he may have been telling the truth. In which case, the murderer is still at large . .

James Craig has lived in London for more than thirty years, working as a journalist and consultant. He lives in Bloomsbury with his wife and daughter.

The team building events and plays are a combination of entertainment and active participation. With ample of games and activities, the experts address the business issues. And most of the events are customized to meet the clients objectives. For more please click Here